In the edgy corner of London that is New Cross, there sits a large, dark, seemingly well frequented establishment known as the ‘New Cross Inn’.  This is a venue that I hadn’t patronised before, what with it being a bit far away from the backwaters of Kent, however on this particular weekend, the New Cross Inn was playing host to the ‘Four Sticks Classic Rock Weekender’; with 20+ bands playing over three days for the bargain price of £40.  Alas, I was only able to attend the first night, but what an opener it was!

My first band of the night was Neuronspoiler, a hard rocking native London quintet who took to the stage with some amazingly high vocals and a classic sound.  Judging from the moshing that was going on over in the corner, this band are building a bit of a following and they rocked a short but sweet set.

Next up came my hometown compatriots, purveyors of fun rock and generally all round nice guys, Saints of Sin. Having not seen them for around four years, I was expecting a slightly different sort of set from them, but they didn’t disappoint and launched straight into ‘Welcome to the Circus‘, from the latest album of the same title.  Featuring such crowd-pleasers such as ‘Feed the Fire‘, ‘Animal‘ and ‘Wasted Nights‘, plus a random yet awesome cover of Bruno Mars’ ‘Uptown Funk’, the Saints put in a good, energetic performance and probably picked up yet more fans at the same time.  I said it years ago and I still maintain that they are ones to watch for the future.

Penultimate band of the night fell to Northern dad rockers, Burnt Out Wreck.  Not having seen them before, in no way did I expect to hear the voice that came out of Gary Moat’s mouth, especially as I struggled to hear and understand what he was saying between songs.  They belted out track after track, including ‘Swallow‘, new single ‘Flames‘, ‘Pulling It Out‘ and ‘Rock Ain’t Dead‘; it certainly wasn’t as BOW finished with a passable cover of the classic ‘Highway to Hell‘.

And so to the headliner, Diamond Head.  This was an eagerly awaited gig and I would say from the outset that each and every member of the band looked thrilled to be on the stage, even Brian Tatler in his understated way.  They kicked off a lengthy and somewhat sweaty set with ‘Shout at the Devil‘, swiftly following it up with ‘Borrowed Time‘ and ‘Dead Reckoning‘. 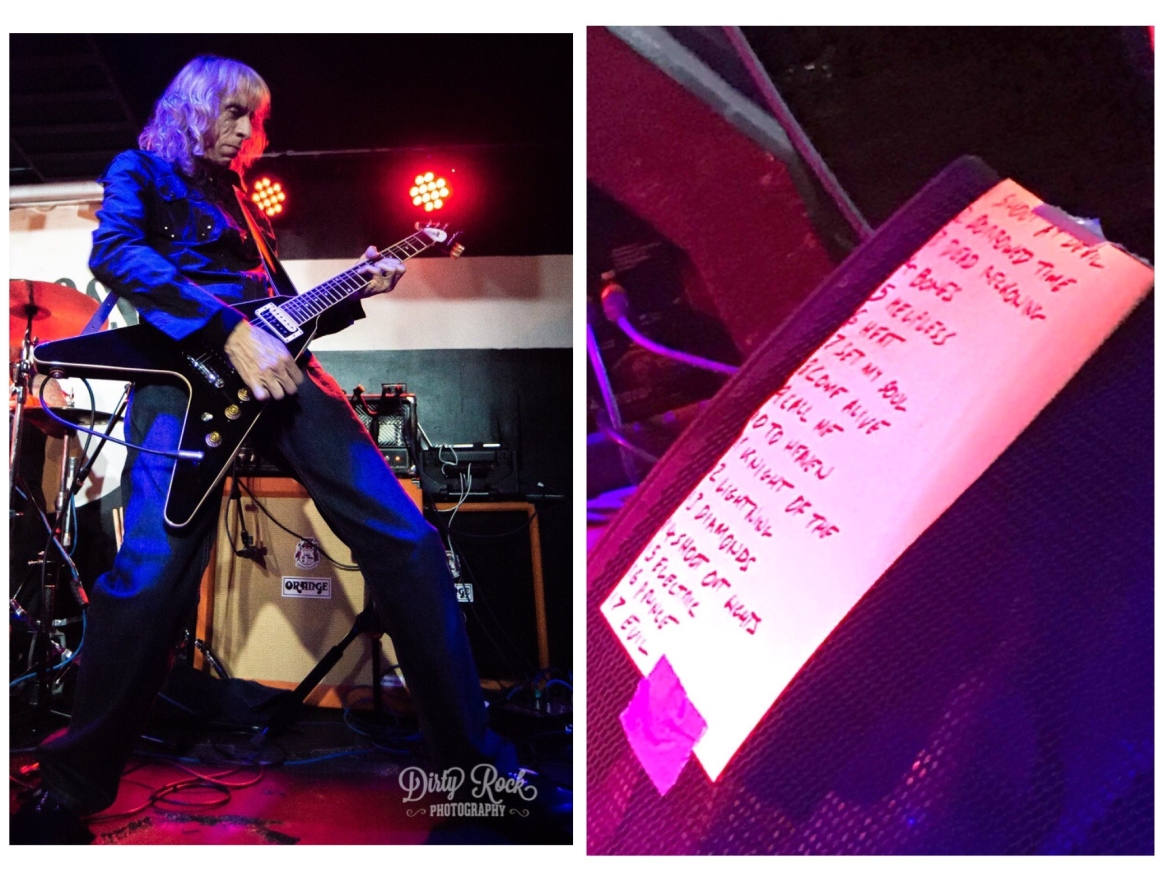 By that time I was flagging, although everybody else was loving it (some a bit too much, judging by some of the beer-soaked chaps sloshing the amber nectar over everyone in the second row) but the brutal songs just kept on coming (set list in picture above).

By the time they got three-quarters of the way through the set, the crowd nearly lost it when Rasmus announced they were going to play a rarely outed song from the “Canterbury” album, ‘Knight of the Swords‘ and they didn’t really get it back during ‘Lightning to the Nations‘.

By the time Rasmus started giving us the, “this man, Brian Tatler, wrote this song”,  speech, the crowd shouldn’t have still been standing, with the amount of ale they’d consumed, but they were more than ready for that song; as Brian took centre stage, spot-lit and menacing for the intro of ‘Am I Evil‘, the patrons of the New Cross Inn lost their shit all over again; perhaps not as energetic as they were at the start of the set, but they made up for it in enthusiasm and fine voice.

Basically, Diamond Head have still got it, in absolute spades.  They’re incredibly tight as a band, they know how to work together to engage the crowd and they rocked our asses off, as did the bands that played before them.  I wish we had been able to get back up to the Inn for the other two days of the Classic Rock Weekender, but I heard from colleagues that it was a blinder.  Well done to the promoters and well done to all of the bands and also the venue.  This is keeping rock music real and keeping it alive.  I’ll be there for the next one!

All photographs courtesy of @kriswhite a.k.a Dirty Rock Photography.  Thanks to Natalie Loren Conway of TAG Publicity.  Thank YOU for reading!

All text is the property of Vikkie Richmond, Queen of Rock.  Photographs are the property of Chris White, a.k.a. Dirty Rock Photography.  No part of this review must be reproduced, either in part or in full, without the express and explicit permission to do so.  Failure to observe this will result in a report to the relevant authorities for breach of intellectual property rights.