Fresh from a recent performance at the highly acclaimed drug and alcohol-free Butserfest, Portsmouth-based Kodiak Jack are certainly on the up.  They’ve been creating a buzz locally, following the release of their rocking second album, ‘Alhambra’ and with a special charity gig coming up and gig bookings coming in thick and fast, I wouldn’t mind betting they’re a band that you’re going to hear a lot more of in the coming months. I was lucky enough to grab ten minutes with them to shoot the post-gig breeze – enjoy! 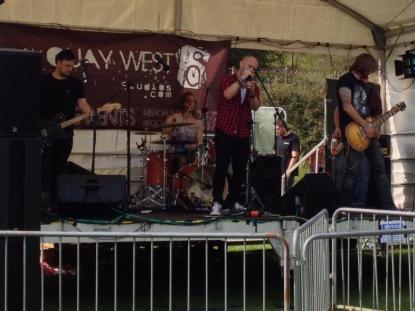 – You played the alcohol and drug-free Butserfest recently. How was that for you?

The Butserfest show was our last gig of a tour around England so it was a great way to wrap it all up. Five minutes before we were due on stage, we realised that my bass guitar and our lead guitarist’s amp were broken, so it was a mad rush to fix the amp and get hold of a replacement bass! Even so, the show went ahead on time, we played a good set and those that were there seemed to enjoy it, which is the main thing.

– Taking it right back, you’ve been going for some years, how did the band get together?

Yeah, it’s about seven years now. The band formed as a bunch of guys in different bands that really just wanted to try something new altogether. There have been some line-up changes in that time but the line-up we’ve had for the last 18 months is our definitive one and I don’t think any of us would change it again for the world.

– How did the name come about?

Kodiak Jack is a rather shady character that popped up briefly in an episode of The Mighty Boosh. A few of the guys love the show and so the name was taken from that.

– If you had to recommend just one of your songs to a new fan, which would it be and why?

I think all 5 of us would pick a different song – but I reckon that’s a good thing! Personally, for me I would say ‘Brother’ which was the first single from our second album. For me, it captures all of our strong points – a big riff, catchy chorus, harmonies, it just rocks really!

– You seem to engage well with your fans; indeed you have your own street team! Have you got supporters who have been with you since day one?

We have friends who have followed us from the start, but over the last few years we’ve developed a loyal fan base and we have people that follow us around to a lot of our gigs which is great. It means a lot to us and shows that we must be doing something right if these people are parting with their cash regularly to travel around and see us play.

– On to the new album, ‘Alhambra’. I believe you recorded it in California – how did that come about and did you enjoy the experience?

A well known music journalist was talking to our manager and he said he would play our material to a friend. The friend turned out to be Brian Wheat who is the bassist in Tesla. He has an incredible studio and liked what he heard, so he invited us out to record our second album at his J Street Recording Studio in Sacramento. 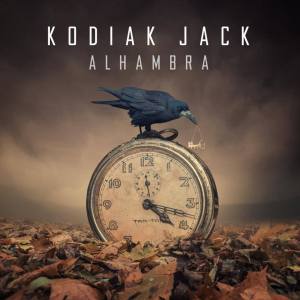 We were there for 4 weeks although some of the guys had to leave early due to other commitments. It was very hard work and 4 weeks isn’t really a long time to make an album so there were a lot of long days in the studio. That said, it was a huge amount of fun! We met some great people and Sacramento is a fantastic place to be. There were some days that were tougher than others, but we knew we were going there to work and not to party for a month. When we did get some down time we made the most of it and relaxed and enjoyed ourselves before we got back to business.

– Did you find it a richer experience than recording the first album? How did it differ?

The first album was done at a much smaller studio over a weekend. It was still fun, and the guy who recorded it knew what he was doing. The main difference was just the scale of everything. J Street is a much bigger, more advanced studio and it was brand new – we were the first band to record there. Plus Brian has 30 years experience in the music industry and has pretty much done all there is to do in the world of rock music, so working with him and fitting in with his methods was also a huge change from when we did the first album.

– What inspirations and influences do you draw upon when you’re writing?

We all listen to different bands, so it really depends on who it is that’s bringing a new idea to the table. Once we start on a new song we all tend to have an input on it and so all kinds of influences start to come through. Our guitarist Jon brings a lot of new ideas to practice, but they often tend to sound a little bit too much like the Smashing Pumpkins for us to be able to use them, which is strange because he has never even listened to the Pumpkins!

– How was it supporting Tesla? They’re obviously somewhat of an iconic band to rock fans of a certain age …

It was an incredible day really. From hanging out back stage at the O2 Academy in Islington right up to playing the last note on stage. Tesla and their crew are all a friendly bunch and we have got to know them quite well now, so it was actually pretty relaxed in the build up. Watching Tesla sound check was an eye opener – we knew right then that we were going to have to be playing as good as we possibly could. There was a big crowd there and they really got in to our set so I think we delivered!

– Speaking of gigs, you’re playing in a charity gig in the next couple of weeks. Do you do a lot of charity work and do you feel it’s important?

We’ve done a few and we have a couple more lined up as well. I think it is important – especially if it’s for a cause that is close to someone in the band. There’s no harm in doing something like that if people will benefit from it and as with all our gigs it’s another chance to hit the stage and do what we love doing. Some of the lads will also be running in the Great South Run for a Portsmouth-based Down’s Syndrome Association charity called Footprints.

– Do you have any festival appearances in the pipeline for next summer?

We sat down with our manager recently and festivals are definitely high up on the priority list for next year. We are already booked in to a two day festival at The Maze in Nottingham in May 2015 and hopefully we’ll get on to lots of other festivals.

– What’s your opinion of the local music scene and of the whole industry in general right now?

Portsmouth has always had a lot of great bands and we’re lucky to have some decent venues in town as well. It’s a bit strange for us because most of the bands are either Indie or Metal and we’re neither! Despite that, there are a few Portsmouth bands that we love gigging with and it’s always good to have a nice relationship with other bands in the area. As for the global music industry it gives me a bit of a headache! I look at the charts and think ‘Who are they?’ Luckily there are some decent bands stealing the pop world’s thunder a little, like Royal Blood for example. The sad thing for me is that bands seem to tour less and less and rely on a handful of big arena shows or festivals instead of hitting the road. It’s so easy for people to get their hands on music these days that a lot of bands probably think its pointless doing a load of travelling to promote something that everyone has already heard and downloaded.

– What’s been the biggest highlight so far for Kodiak Jack?

The Tesla show back in June is easily right up there for me. There was a sell out crowd at a fantastic venue, and we were opening up for a great rock band. I’d happily do that every day! The crowd were there for Tesla and the vast majority had never heard of us, but by the end of our show they were loving it and we were getting stopped by people all night asking for photos and autographs. That was a great feeling and made all the hard work preparing for the gig well worth it.

– What’s next for Kodiak Jack?

Well we have plenty of gigs booked and no doubt a few more will be added, but as well as that we are working hard on new material for a third album. A few new tracks have been tried out live now and have been well received so we just need to keep writing, practicing and performing as much as possible. Nothing gets handed to you on a plate in music so we need to be seen to be busy and consistently coming up with some more great tunes for people to enjoy!

Watch out for Kodiak Jack – they’re going to be massive!  Check out the video for ‘Brother’ here http://youtu.be/8rbrjozCYf8