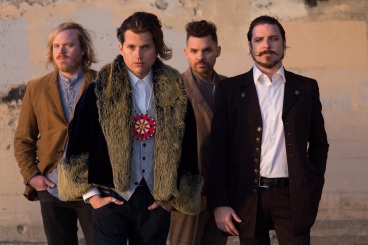 It’s been quite a year for Californian rock and rollers, Rival Sons.  Fresh from a string of European dates, an award-nominated fourth album and a generally steady trajectory into the big leagues, tonight they were scaling the dizzy heights of … Portsmouth.  Not that there’s anything wrong with Portsmouth, in fact quite the opposite.  The newly refurbished Pyramids Live venue has a much improved sound system and a lovely new carpet – what more could a rock and roll fan ask for?

Kicking proceedings off was an earnest, solo young man from California by the name of Jameson.  Despite the unfunny comments about Irish whisky coming from the somewhat inebriated, older people I had the misfortune to stand next to, he did well.  Most of the audience were appreciative and considering it was just him and his guitar, I thought he did a fantastic job of holding everyone’s interest.  He has a new EP out, ‘Carnivore’, so I would recommend that you check him out. 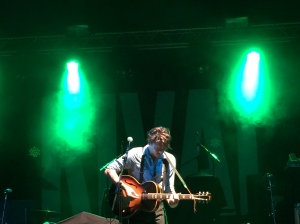 Next up were the sensational Swedes, Blues Pills.  This was the second time I’ve had the pleasure of catching this band and I like them more each time I see them live.  Elin looked resplendent in a short red dress, long hair flying as she got into a groove, tambourine in hand.  With fantastic songs such as ‘Devil Man’, ‘Black Smoke’ and the finale of ‘Little Sun’, Blues Pills went down a storm and Elin’s voice is a treasure to behold.  It goes without saying that you should go and buy their eponymously titled debut album. 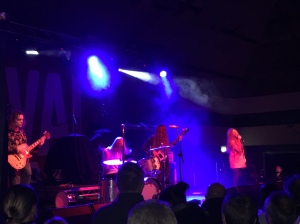 Finally, we came to the headliners.  Fresh from a record signing at the quaint and very welcoming ‘Pie and Vinyl’ in the town centre, Rival Sons took to the stage in a burst of colour, opening their set with ‘You Want To’.  Jay’s voice was sublime, Scott’s guitar playing was ethereal … I could go on, but they had me, and probably everyone else in the room, captivated from the first note. The awesome signature tune, ‘Pressure and Time’ followed and then, much to the delight of the crowd, the romping ‘Electric Man’.  Jay’s vocal did strain a little bit on ‘Secret’, but purely because he was so in the moment, I think, sinking to his knees with the microphone – nobody could ever accuse this band of not giving 110%.  Scott also gave us a sublime guitar solo during ‘Manifest Destiny, Part 1’. 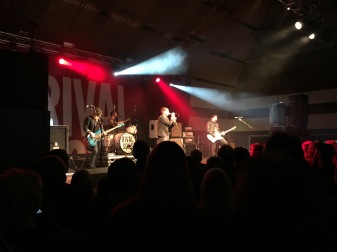 One awesome track after another followed and it’s not very often that a band can hold an entire room in the palm of its hand for an hour and forty minutes – Rival Sons managed it effortlessly, almost made it look easy, even.  When they left the stage there was uproar, the crowd hungry for more and the Californian rockers obliged them with a four-song encore, starting with the insolent ‘Open My Eyes’ and ending with trademark song, ‘Keep On Swinging’.

It’s easy to be biased when you really like a band, but these guys came out looking every inch the rock and roll stars that they are and they just owned the stage from start to finish.  Today Portsmouth, tomorrow … well, who knows where Rival Sons’ epic journey will take them.  One thing is for sure, if you get the chance to see them in the next twelve months at a local venue near you, do it.  You might not get another opportunity for such an intimate gig. 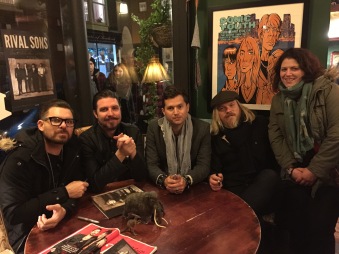