Dendera are a heavy metal outfit hailing from the South West of the UK, who have been producing their brand of caustic rock since their debut EP release in 2011.  Two blistering albums followed; 2013’s awesome “The Killing Floor” and 2015’s quality follow up, “Pillars of Creation”.

The band are no strangers to the live stage, indeed that is where their musical ability really shines; they have graced the same stages as rock royalty such as Saxon, UFO, Alestorm, Orange Goblin, Gloryhammer and Soulfly, to name but a few.  “Blood Red Sky” is the first instalment in a two-part set of EP’s. 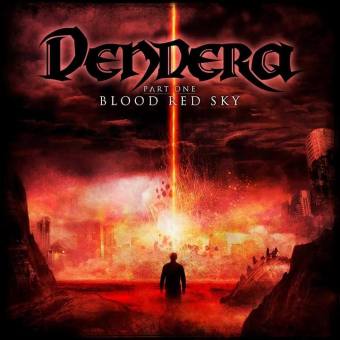 The first track on the EP is “The Awakening”, which came as a bit of a surprise.  Coming in at a mere one minute and forty four seconds, it is an instrumental bruiser which showcases some nice guitar work; it’s a solid introduction into what to expect for the rest of this five track offering.

The first track proper, “Final Warning” begins at a wicked pace and Ashley jumps in feet first with his distinct vocals almost straight away.  There are some sweet pinch harmonics hidden away in there and there is no let-up in energy all the way through.  The instrumental bridge is followed by some first class technical drumming and a blistering guitar solo.  It’s a shame when the track ends, really.

Title track “Blood Red Sky” showcases more of the same, galloping along at breakneck speed.  There are some mad vocals towards the end of this track and Ashley does have that knack of slipping into a range almost high enough to shatter crystal.  The penultimate song comes in the form of the manic “Age of Agony”, with some thought provoking, anger inducing lyrics, ending abruptly with the dying crash of a defiant cymbal.

All too soon, the last track comes around and “When All Is Lost” is a fitting end, a bruising chugfest of a song – almost eleven minutes long – that captures the essence of Dendera perfectly.  I particularly like the way the action is taken down several notches halfway through, before ramping back up for a semi-dramatic finish.

I believe that Dendera have passed into another league with this EP.  “Blood Red Sky” is not only unique; it is a masterclass in tight musical ability and dedication to the craft from some very talented people.  You can also hear the obvious progression for them as a band which has elevated them another notch on the ladder to rock glory, with a perfectly produced and formed record.

The only thing I’m disappointed about is that this is only four tracks, if you discount the short intro piece.  I wanted to hear more and I’m pretty sure with the form they appear to be in at present, Dendera could have produced a full length album, rather than releasing two EP’s at separate times.  That’s not a criticism, just a desire to see more of what they can do.