At last.  All of the anticipation, the teaser trailers and the hype have led to this moment.  I have in my hot little hands a copy of the new Alter Bridge album, ‘The Last Hero‘.  The boyfriend bought it for me yesterday afternoon; I left it in my bag, waiting for the right moment in which to reverentially unwrap the cellophane, smell the ‘newness’, read the liner notes and take time to study the whole package … it’s now Sunday; it’s a glorious, sunny, chilly morning and there’s not a sound to be heard except for the birds on the rooftops.  This is the time.  I’ve got my headphones on, I’m sitting back with a cup of tea … so, read on, dear follower, read on.

So.  Alter Bridge five is here.  ‘The Last Hero‘ has been eagerly anticipated for months; produced and mixed by Michael ‘Elvis’ Baskette (as well as previously working with Alter Bridge, Baskette has also worked with Tremonti, Slash and Trivium, among many others), it is a 13 track opus (14 tracks if you have the special edition CD) that screams ‘platinum seller’ at the top of its lungs.  This, ladies and gentlemen, is a stunning masterpiece of an album that will uplift, thrill and delight you.  Let’s take a closer look …

Opening track ‘Show Me A Leader’ catapults us straight into the action with a nice guitar lead in. This is a huge song; it has an upbeat, uptempo feel and makes for a pretty thrilling introduction to AB5, making you excited as to what might come next, which is …

‘The Writing On The Wall’ intro has a military feel to it, with some immense drums – there are just layers of sound here that made me want to listen again and again. This is a track with plenty of attitude which sounds quite dark.

Third song ‘The Other Side’ is a pretty sexy track; it has a good, chuggy feel to it and I think it has real crossover appeal to fans of other genres as again, it is quite dark.  There are some naughty sounding vocals from Myles and it’s just a full on, stunning track.  I’ve listened to it five or six times already and it’s a firm favourite; if they don’t play it live in November, I’ll be really disappointed!

‘My Champion’, ‘Poison In Your Veins’, ‘Cradle To The Grave’ and ‘Losing Patience’ are all bangers; any and all of these songs will go over very well live.  They are also unmistakably ‘Alter Bridge’, featuring some nice harmonics. ‘My Champion’ is particularly uplifting.

Eighth offering, ‘This Side of Fate’ is a huge track.  With beautiful vocals and a lovely melodic guitar sound, it’s part ballad and part epic masterpiece. The song has a particularly rousing bridge, which reminded me a tiny bit of early Muse, but the whole thing just soars in your ears, making your heart pound and your fingers tap … it made me a little bit sad when the song came to an end.

The melodic ‘You Will Be Remembered’ brought tears to my eyes as it got me thinking about my Dad – a lovely song which is well followed up by the bruising ‘Crows On A Wire’; taking you straight back into the action with a heavy intro featuring some choice pinch harmonics, it’s another definite favourite of mine already.

‘Twilight’ is a powerful and melodic song that is a pleasure on the ears, with some thoughtful lyrics and again, that big, big sound.  ‘Island Of Fools’ and bonus track ‘Last Of Our Kind’ are two more great tracks and ‘The Last Hero’ is also stunning, with some marvellous vocals. 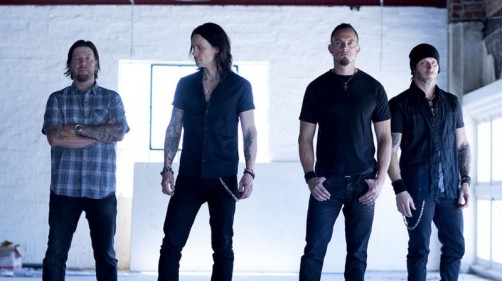 To sum up, ‘The Last Hero‘ is pretty much everything I hoped it would be and so much more.  It’s epic and immense.   Baskette has done an amazing job with the production and this album has undoubtedly taken Alter Bridge to the next level.  I would have given it 10 out of 10, but … well, where would be left for them to go with number 6?!

There is no doubt that non-fans of Alter Bridge (which is in itself an alien concept – I mean, who wouldn’t be, right?) will say that there is nothing new in this record, that it sound like, well, Alter Bridge.  If you are a fan and have even one other album, you will agree that it sounds like AB.  But you will also realise that there is so much more to ‘The Last Hero‘; it’s a brilliant, themed journey from start to finish, rather than just a random collection of good songs.

Roll on November – I can’t wait to hear the new material and to be part of the Alter Bridge live experience once again.

Lyric video for ‘Show Me A Leader’ – here

Video (audio) for ‘The Other Side’ – here

The whole world has heard of Alter Bridge, right? With their 5th album due, anticipation couldn’t really get any higher, after the 2014 smash hit ‘Fortress’.  So, if you have four competent musicians who are fervent AB fans, including a singer who bears more than a passing resemblance to Myles Kennedy (and sounds like him, too), it seems natural that they would form a tribute band. Enter Altered Bridge.

Billed as ‘the UK’s first and only AB tribute band’, Altered Bridge hail from the south of England and before this gig, had performed as a band a grand total of two shows.  No pressure, then, when you are booked to play a legendary UK venue.

Just getting to Chinnery’s from Bournemouth was apparently a mission; traffic was hideous, but our fabulous foursome battled through and made it in good time.  There was no support band, so the beer was flowing and the tunes were playing to warm up what could be described as a bit of a scant crowd.  The die-hard rockers that did make it, however were most appreciative of Baz and Co’s efforts, as they kicked off their set with the stonking ‘Come to Life’, followed by the immense ‘Bleed It Dry’.  Anthem followed anthem in a very accomplished set, taking material from across the spectrum of AB albums.

Myles (Baz) looked the part, to be sure, although he seemed a tad nervous in places, especially when bantering with the crowd.

I wish there had been some more bodies there to soak up the atmosphere and make it a better gig for them, but there was definite appreciation from all corners of the room, especially when the epic track ‘Addicted to Pain’ popped up. 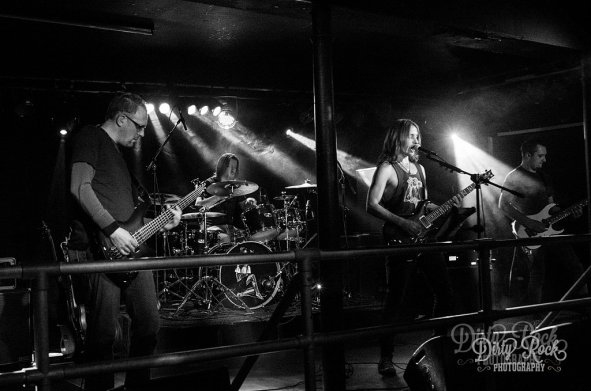 The iconic ‘Blackbird’ was despatched with efficiency and then the rest of the band melted away, leaving Baz solo to pick up an acoustic for a beautiful version of ‘Wonderful Life’ and ‘Watch Over You’.

I particularly enjoyed ‘Isolation’ and the ever thoughtful ‘Ghost of Days Gone By’.  A big cheer erupted when Baz asked who had tickets to see our silky haired hero and his beloved band mates later this year, so I guess pretty much the whole room were counting down the days to an Alter Bridge gig in November.

So, basically you can’t go wrong if you love Alter Bridge; these guys know how to rock a room, they’re very competent, the ticket price was ridiculously cheap for musicians of this calibre and with more gigs under their collective belts, I can see them packing out bigger venues and possibly even attracting attention from the real thing. If I had any criticism at all, I would just say that Baz needs to load up the ends of the songs with some more vocals; occasionally he was content to just play rather than sing to the end.  He has a great voice – we want to hear more of it!

You can watch the video for ‘Addicted to Pain’ at Chinnery’s – it’s a little bit dark! – here

Thanks to Dirty Rock Photography for the pics – click the link to see the whole album!