I recently caught up with Martin and Ryan from Hampshire-based rock band, Screaming Steel to talk about all sorts of lovely things, including their eclectic musical influences, how they came by their band name and … why they’re ‘friends’ with inflatable swords … enjoy! 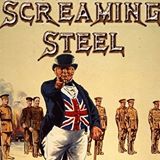 – How was the recent Joiners gig (supporting Dendera) for you?  The crowd seemed to like you … the inflatable swords went down a storm!

Ryan:  It was the best response we’ve had so far and not just down to the inflatable swords, we hope. It’s always easier for the first band to be watched as the crowd are more engaged at that point, so we were chuffed that everyone turned up to watch.

Martin:  I really enjoyed the Joiners gig from where I was sitting.  Like Ryan said, it’s easier to be the first band on but at the same token, it can be a killer if no one turns up when the doors open.  We had to make an impact both visually and musically and the inflatable swords and the music were our friends on the night.  We all had a great time.

– How did you choose the name ‘Screaming Steel’?

Martin:  That was down to me, I recall.  We needed a “metal” name and I grabbed a band name generator from the net, specifically a metal one and after two attempts, Screaming Steel popped up, it was a no brainer as it just fitted the band perfectly.

– How would you describe your style?

Martin:  I’d like to add that our style can’t be specific to one or two bands because every member of the band has different influences.  My music taste is very eclectic and I’m proud to admit it, so listening to different genres of music, from funk and soul to heavy metal, has defined my playing style.  If I had to put my finger on one ancestral origin for the band, I’d say NWOBHM (Saxon, Judas Priest, Iron Maiden and Black Sabbath).

– If you had to recommend one of your songs for a new fan to listen to, which one would you pick and why?

Martin:  I am particularly proud of ‘Rider’. Joe (our singer) phoned me just after I joined the band and said “You ride a motorbike don’t you?  I’m gonna write a song about riding a bike”; the rest is history.  ‘Rider’ shows all sides to “The Steel”, it’s just a pulsing great foot-tapper.  However, if I was to recommend a chanting metal anthem, it would be ‘Hammered’, a song we wrote in five minutes and has had little change in composition since its inception.  I have a great friend in California – he builds the best snare drums on the planet – I sent him a copy of our demo and within a week ‘Hammered’ was played on his local radio station (they had a charity day where they’d play anything you requested for a $20 donation) and the DJ’s were singing the chant during the song that was played after ‘Hammered’.  It was a proud moment to know we’d been played on radio in the USA.

– You’ve been doing your bit for charity lately, do you feel it’s important for bands to get involved in charity work, or do you just do it because it’s a local cause close to your hearts?

Martin:  Well, I can answer that one as charity gigs stem from links to me.  Last year in May, our first gig was a joint concert with various acts from the Isle of Wight who came together to perform a concert to raise funds for the Lottie Rann trust.  Lottie is my niece and to cut a long story short, contracted meningococcal meningitis twice. That type of meningitis is the most dangerous of all and can be a killer.  We all rejoiced when Lottie recovered from the first one, but when she got it a second time (which is a billion to one chance) she was paralysed from the neck down.  That was two years ago and now she’s in an electric wheelchair, has control over her limbs, can speak and is able to feed herself.  The concert was all for her, so that she had funds to get a wheelchair and all the adjustments to the family home to make it wheelchair friendly.  Ironically, I met Ryan and Joe for the first time the evening after Lottie contracted it for the second time to talk about joining them to form a band, so Lottie has been there from the beginning of The Steel and thus is a cause close to the heart of the band.

We are doing a joint charity night in Ryde, Isle of Wight in November for another charity cause that’s personal to me – Ryde Inshore Rescue.  Recently some nasty individual took a screwdriver to both of the rigid inflatable lifeboats and destroyed their capability to save lives.  Both boats were out of action and still are right now, but they’re being fixed.  So both The Steel and another band I am in (Ozzy Osbourne tribute band We Waz Ozzy) are doing a gig to raise funds for RIR.

Obviously we can’t perform for every charity we’d like, but charities that are close to us get our undeserved attention.

– You recently acquired a new bassist; how has that affected the band dynamic?

Ryan:  Dramatically, he has reaped new life into the dexterity or our playing and writing.

Martin:  When James, our founder bassist decided to leave we thought it would be a struggle to find a replacement, but we found Sam through an internet ad and he’s brought an explosive dynamic to the band that we’d never thought possible.  He’s brought fun and oodles of enthusiasm and the whole direction of the music has improved, he really is a diamond (but don’t tell him I said so!).

– I understand you’re currently writing some new material, can we expect to see a release soon?

Martin:  With Sam on board, we’re foregoing songs that were in the pipeline for songs that the four of us have written together, normally through a warm-up jam at rehearsals.  The new material, like ‘Deathclaw’, is an improvement from the past songs, and we’d like to think we’ll have enough new material to start recording an album in the early part of 2015.

– Who influences you musically?

Martin:  Where do I start?  Drumming-wise, it started off with Phil Collins and Phil Gould (drummer for Level42) but as I progressed with my playing and listening to different music, I have a plethora of drummers who I’ve pinched ideas from.  Musically, I’m a big fan of 80’s American hair metal (Poison, Cinderella, Mötley Crüe and Dokken, to name a few) and that whole genre has become a major influence and source of playing ideas.

– If you could tour with any band, alive or dead, who would you choose and why?

Ryan:  Metallica, just because they are Metallica.

Martin:  I’d like to say Led Zeppelin but then our performance would have to be legendary for the audience to remember us.  Opening for our heroes like Judas Priest and Iron maiden would be a real compliment.  And I love Rammstein, so supporting them would be just as cool.

– What do you think about the current state of the music industry?  Where do you see rock and metal heading in the next 5-10 years?

Ryan:  It’s pretty much a developing world with metal. It has been around since ‘69 and has a very stable dynamic in the musical world. The fact it’s managed to stay a niche for so long is fantastic and keeps itself fresh. New bands come and go; eventually the style shifts slightly but usually for the mainstream, not the fans. Metal is an intellectual people’s music and will always be a back burner of any household from Thin Lizzy to Dimmu Borgir. I hope I’m still part of it in 10 years, or at least helping to shape it.

Martin:  I’d like to think that The Steel will collect new friends, or ‘Screamers’ as we call them.  I’d also like to see us record some of our songs, we have some great feedback from people who’ve been to our gigs and they’ve been hungry for an album size collection of material.  The great unknown, as Ryan put it, is actually where it’s at, we can’t predict our future but if we’re healthy, still great mates and having a blast, then that would be the best thing to look forward to.

Catch the video for ‘Deathclaw’, filmed at the Joiners gig https://www.facebook.com/video.php?v=664586440301511 – you can also check out Screaming Steel at www.facebook.com/ScreamingSteel

Another beautiful day, another walk in the sun ❤️ #gratefultogetoutonceaday #walk #exercise #sun #blossom #bluesky #palmbay #margate
This is how it turned out ... after three bites, my mouth was on fire! I particularly enjoyed my homemade minty yoghurt dip ... #moroccanfood #spicy #spicyfood #rice #naanbread #tzatziki #homemade #inventivecook #makedowithwhatyouhave
So. What can you cook when you don’t really have much in the cupboards and you haven’t been able to get to the supermarket? 🍷Defrost some diced beef🍷fry off some onions with olive oil, turmeric, chilli flakes, Worcester sauce, pepper and an unidentifiable powder that could be either ras-el-hanout or garam masala🍷add a bell pepper and some mushrooms🍷add kidney beans and chopped tomatoes ... stay tuned for the result - it smells like Marrakesh in the kitchen! #moroccancooking #middleeasternfood #raselhanout #garammasala #spices #beef #spicysurprise #improvise #inventivecook #magicstorecupboard
I have barely been out this last five days and I will continue to stay at home, or walk outside but where other people are not, to avoid putting myself or anyone else at risk. People who do otherwise are risking the health of friends, family and vulnerable people. It’s common sense. #stayathome #socialdistancing #coronavirus #covid19 #stoppanicbuying #pandemic #keepyourdistance #stayhealthy
Just about to break open my one and only packet of spaghetti 😭I don’t really care as we are desperately buying takeaway booze from the @thelaughingbarrel to keep us going. Don’t drink a pint of Ramblin’ Man cider after having a beer, boys and girls, unless you have the tolerance of an elephant. Am meant to be doing an online training course at 7pm 😂 #facedowninmybolognese #ramblinman #ramblinmancider #thelaughingbarrel #spagbol #whoateallthepasta #wontbeabletogetanymore #pasta #spaghetti #myspecialty #cider #micropub #supportyourlocal
Always handy to have a mini first aid kit in the house, especially when you run up the stairs with no shoes or socks on and tread on a mysterious and random shard of broken china! So. Odd. 😶Don’t worry, I have now stopped bleeding, thanks to the aid of Germolene liquid plaster 😮 #ouch #homeaccident #firstaidkit #thankgodforalcoholwipes #germolene #meoldchina #random