Damn Dice recently released their self-funded, debut album ‘The Great Unknown’.  Fresh from a triumphant tour with Black Rain, and today’s amazing Camden Rocks set at the Electric Ballroom, I caught up with vocalist Alex for a beer and a chat about the merits of physical CD’s versus downloads, festivals and wrestling … 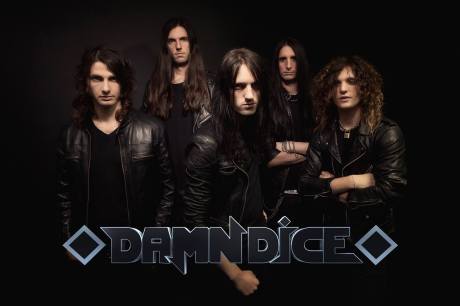 Vikkie: You just played the Electric Ballroom for Camden Rocks Festival – how was it for you?  It sounded pretty good from where I was standing!

Alex:  It was amazing – I don’t think we expected such a turn out; you were there, you saw how busy it was.  That always spurs you on but we always try to give everything.

V: You always give 110% and you’re all about the live show.  When you have to take time out to record, do you enjoy it, or would you rather be out on stage?

A:  We enjoy it, definitely.  Of course, it’s good to play live but when you’re writing the songs and they come together, you get that excitement, like when you first join a band.  You want to play them live and people don’t know them but the recording and writing process is fun, not so much in the studio as there is a lot of waiting around, especially for me as I go last!  It’s a good experience. 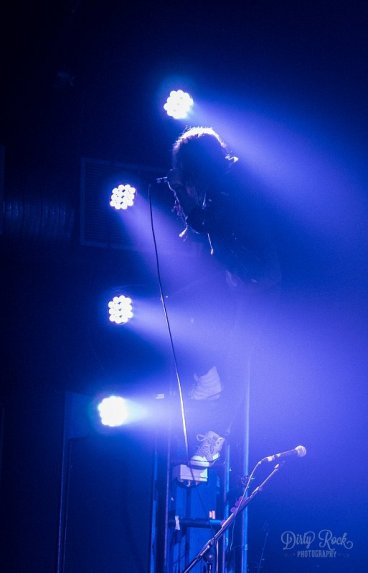 V:  Where did you record ‘The Great Unknown’?

A:  We recorded at Angry Bee studios in Hackney, which is my home turf.

V:  It’s a fantastic album, quite different to the EP.  You all write together, so what influences do you draw upon?

A:  Most of the bulk of the music comes from Wallis and François (Fourmy, brothers) and then we get together to do the vocal stuff. I do the lyrics and most of the vocals.  I don’t think there’s one moment where you think ‘Oh yeah, I want to write about this’, but you just draw on things you’ve noticed, things that have happened, experiences that you’ve had.

V: I didn’t actually realise that Wallis and François are brothers – François designed the website, didn’t he?

A:  He did, he does all of the visual stuff; he’s a dab hand at Photoshop and he did the editing for the videos … he’s really good at that stuff!

A:  We hope to get the majority of it, at least the writing, done in the second half of this year.  As to the recording, we still have to find a way to realise that in terms of money.

V:  Do you find that it’s harder to reach people, as you aren’t signed to a record label?

A:  I don’t know … a record label, what can they do really, apart from chucking a whole load of money behind you and getting you in the magazines?  Otherwise it’s social media these days, isn’t it?  For example, if you are going to check out a band, you’re going to go to Facebook, Twitter …

V:  I found you through Twitter originally, there are some great bands to be discovered in that way!

A:  It’s easier to update.  It’s good to have the website because you can put a lot of stuff there, like a shop, information – obviously you can’t do that with 140 characters on Twitter!  You kind of need a website.

V:  You added your fifth member of the band – Diego – in August last year.  What was behind the decision to bring in another member?  Why go from a four piece to a five piece?

A:  Sound, basically.  What often happens is many of the songs have a key change in the solo and if you haven’t got a good bass sound, it’s difficult for the listener to hear what’s going on.  You might change key and the guitar player starts soloing and people think it’s in the wrong key or it sounds bad because you can’t hear the bass properly.  We decided to have another guitar player to give it that foundation.  When we recorded, we recorded a guitar track under the solos anyway, which is obviously not do-able live with one guitar player so we decided to bring [Diego] in to make sure we have the full sound that we needed for the live shows.

V:  Do you not find it hard, with four of you bouncing around on stage?

A:  It depends on the stage!  The Electric Ballroom is quite a big stage.  At the Barfly, you do knock into each other a bit. 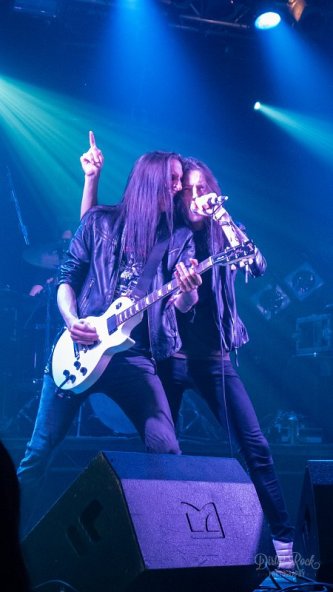 V:  If you had to pick two or three of your songs to introduce you to a new fan, who had never seen or heard you before, which would you pick?

A:  Maybe ‘What Now?’ because that’s one of the newer songs that we wrote and I think it represents the direction that we are going in more than the others.  I have a soft spot for ‘Caught In the Ride’ as it’s the first song that we wrote together and I love that song.

V:  We’re into festival season, Camden Rocks kicks off just before Download … haven’t seen you on the bill for Download?  Anything else lined up in Europe?

A:  Unfortunately not.  Maybe this is where labels and having outside representation can help you.  Contacting people directly … I feel like there’s a guy who sits there on his computer and gets 10,000 emails from unsigned bands … that’s how it feels.  Hopefully we will be doing that next year.

V:  Do you all take your turn at networking and keep an ear out for opportunities?

A:  We all actively contact people and get them to contact us.  We try as much as we can, of course, we have to.  If we’re not there, it’s not for want of trying!  We are going to have a bit of a break in August, though.  There are so many things to do and you can’t just concentrate on one thing.  When you are in the situation that we are, you have to do everything yourselves.  Contacting people, following up, promotion, social media, developing graphics and pictures, video … and all that goes with it.

V:  It’s a lot of work.  What’s next for Damn Dice though?  You’ve said that you’re going to have a break, you’ve hinted that you might possibly have a new album.

A:  We want to just gig as much as we can, just get out there.  I think the best thing you can do as a band is just play as much as you can.  Sometimes we might be spending money, on travelling and other stuff, but ultimately it’s an investment. You can’t just sit at home, you have to push your product, basically.

V:  I’m glad you said that, because so many bands do just sit at home, thinking that it’s too hard.  It’s totally the wrong attitude and it’s probably why so many bands just die on the wayside.

A:  You need to put the effort in.  When you’re a five piece band … we split everything.  We split costs, it’s not that bad, but the most important thing is getting out there to play because if no-one knows who you are, what’s the point?  Your Mum’s always going to be a fan, but you need more than that!

V: I had a question from a fan on twitter, which was, “Would you rather play at Madison Square Garden, do a film soundtrack, or open for Bruce Springsteen”?

A:  The Garden, definitely the Garden.  It’s iconic and I’m a big pro-wrestling fan and Madison Square Garden is the spiritual home of WrestleMania.

V:  So … you’re a wrestling fan, you play classical guitar and you have really bad eyesight … that’s what I’ve learned about you today!  Anything else you would like to put out there that people don’t know about you?

A:  I think that about covers it!

V:  Do you download music or do you like to have that physical CD in your hand?

A:  I download music.  I can’t remember the last time I bought a physical CD.  I have a lot of CD’s at home, but I listen through my computer – I don’t have a separate CD player and I definitely don’t have a record player.  I think there’s a generation who grew up not knowing physical music, so the concept of listening to an album probably doesn’t exist for a lot of young people. The dynamic has changed as well because if you go back to vinyl, you have two sides, a side-A and a side-B and the album was structured based on that idea so there would be certain songs faster or slower and arranged in a particular way.  When it went to CD with just a long stream of music that had a certain dynamic as well.  Now, I think people don’t listen to ‘albums’ from start to finish, they like this song and that song, so they will download those.

V:  So when you’re writing an album you don’t have in mind that you’ll start with a particular song …

A:  Yeah, we still do.  We put a lot of thought into the track listing.

V:  Do you have any messages for Damn Dice fans?

A:  Everyone that’s already a fan, thank you so much for supporting us.  The most important thing is support local music, get out to the gigs if you can.  You know if you like the music, buy it, because ultimately it helps.  If I like a band, I will buy their music because it’s a way of supporting the band.  If an album costs £10, I’m going to buy it; I’ve just bought two beers, which cost nearly £10 and I value music more than I value beer!  Support local bands, get out there because it does make a difference to the band.  When you see people there and they like the music it does make a difference to us, to the bands.  When I go to see a band that I like, it means a lot to me to see these guys.  £1 is not much to spend for a song that you like and every little helps.  Support your local scene and have fun.  We have fun, so we want to invite everyone else to have fun with us! 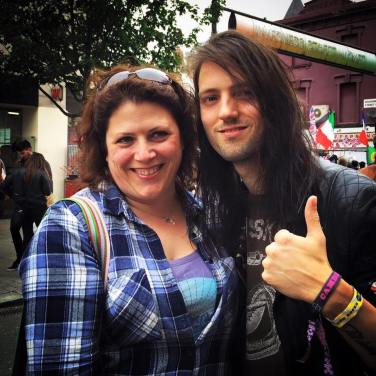 Check out the videos for Rock (Like You Mean It), What Now? and my personal favourite, Driven